MADISON, Wis. — Wisconsin regulators lack the authority to require businesses to clean up contamination from PFAS chemicals and other toxins because legislators haven’t established any restrictions on them, a judge ruled Tuesday.

Waukesha County Circuit Judge Michael Bohren’s decision means the state Department of Natural Resources must wait for legislators to define them and impose limits in state law or through an administrative rule. Both approaches can take years.

“Today’s ruling threatens to remove the only meaningful public health protection we have to address PFAS contamination in Wisconsin,” said Tom Kilian, one of the founders of Citizens for a Clean Wausau, a city that has been grappling with PFAS-contaminated groundwater.

Bohren said he understands that the DNR must protect the state from pollution, but that “there’s a way to do it” and the agency right now seems to be operating “on a whim and fancy.”

“When the government ignores the rulemaking process, employers are left in the dark as to what regulations they must follow. Businesses cannot afford to have that kind of uncertainty, and we do not think it is too much to ask for DNR to simply follow the law as written,” Manley said.

Assistant Attorney General Gabe Johnson-Karp, who represented the DNR in the case, said the ruling creates “significant concern about regulatory uncertainty” and told the judge he plans to appeal. Bohren agreed to stay his decision until a June 6 hearing.

The ruling stems from a lawsuit filed in 2021 by Wisconsin Manufacturers and Commerce — the state’s largest business group — and Leather Rich, Inc., an Oconomowoc dry cleaning business.

According to the lawsuit, Leather Rich entered a DNR program designed to help businesses that voluntarily report pollution with clean up in 2019. The following year DNR officials declared that businesses in the program need to test for “emerging contaminants,” including PFAS, without explaining which of the more than 4,000 PFAS compounds to look for or what levels would be considered too high.

The agency lacked any basis in statute or rules to make such a move, the lawsuit maintained. The agency built a list of emerging contaminants without any legislative oversight or opportunity for public comment that would have been available through the rule-making process, the plaintiffs argued.

Drafting rules typically takes state agencies years. When the language is settled, the regulations still must win legislative approval — a tall task given that Democratic Gov. Tony Evers controls the executive branch and Republicans run the Senate and Assembly.

Environmentalists countered that the DNR must move quickly when the agency learns of contamination and shouldn’t be bogged down in a rule-making process that can take years.

Johnson-Karp and other state Justice Department attorneys defending the DNR have argued that there’s no dispute that PFAS are toxic and that Wisconsin law gives the DNR broad discretion over how to handle contaminants. What’s more, a judge lacks the authority to order the DNR to promulgate rules because rules are subject to legislative approval, they insisted.

PFAS is an acronym for per- and polyfluoroalkyl substances, man-made chemicals used in non-stick cookware and firefighting foam. Research suggests they can cause health problems in humans, including decreased fertility, developmental delays in children, increased risk of some cancers and a weakened immune system, according to the U.S. Environmental Protection Agency.

The DNR currently lists nearly 90 sites across Wisconsin with PFAS contamination. A number of municipalities are dealing with PFAS-contaminated groundwater, including Madison, Marinette, the town of Campbell just outside La Crosse, Peshtigo and Wausau.

The DNR’s policy board adopted limits on PFAS in drinking water and surface waters that can support fish in February. The Legislature has yet to sign off on them, however. The board has refused to impose standards for groundwater, citing the cost of replacing wells and installing treatment equipment at water utilities.

It’s unclear what impact Bohren’s ruling could have on that lawsuit. Rob Lee, an attorney for environmental law firm Midwest Environmental Advocates, said the decision could negate the state’s authority to file such actions.

“If this decision remains in effect, state law’s protection of clean water would be substantially narrowed, endangering the health of Wisconsinites, and making it easier for polluters to escape accountability,” Attorney General Josh Kaul said in a statement.

Thu Apr 14 , 2022
Want a destination with a low risk for Covid? Consider Africa. CDC For international travelers, the weekly updates by Centers for Disease Control and Prevention (CDC) to its global risk assessment map are meant to tell a story of where Covid-19 still remains a risk to travelers. It seems to […] 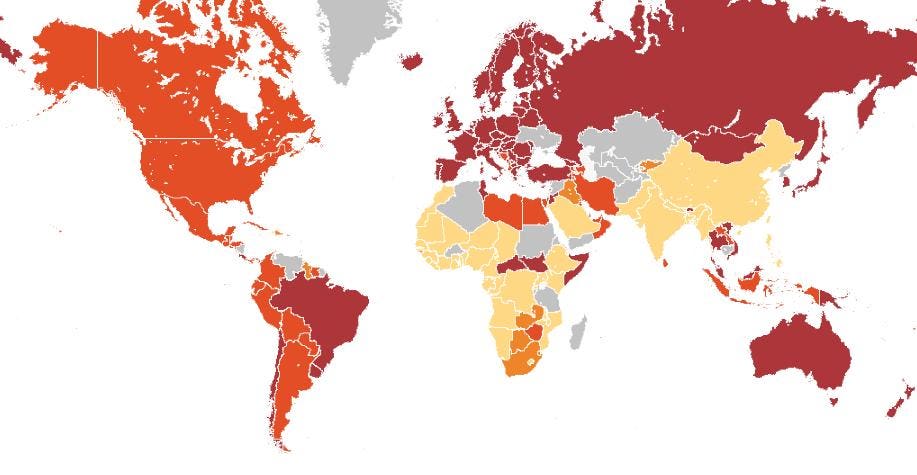