Is it “good” to be accused of conspiring with your client, the president of the United States, to commit fraud and obstruct an official proceeding? Asking for coup curious Trump lawyer John Eastman, whose effort to hang on to his license to practice law took another hit yesterday as the January 6 Select Committee argued that his attorney-client privilege assertions are invalid under the crime-fraud exception.

Eastman, author of the infamous memos arguing that Vice President Pence had the unilateral authority to reject electoral votes, made the unorthodox decision to use his work email at Chapman University to plot an electoral coup. Well, his former work, since Eastman “retired” approximately five seconds after those memos were made public.

When the Committee subpoenaed the school for the communications, Eastman sued in the Central District of California to block enforcement, a move he will probably regret for a long, long time, since it landed him in Judge David Carter’s courtroom. Judge Carter refused to block the subpoena, swatting aside Eastman’s arguments about the Committee’s “illegitimacy,” and ordering him to process 1,500 pages per day, with a privilege log and daily report to the court.

Eastman’s definition of privilege could be fairly characterized as “sweeping.” He’s more or less insisting that anyone he emailed about elections at all is covered.

The Committee, already slogging through a dozen cases in DC federal court, which is moving slower than ever thanks to hundreds of Capitol Riot defendants, has no intention of wasting Judge Carter’s speedy docket. And Eastman’s vague handwaving over vast swathes of his correspondence has given them a perfect opening. So yesterday the Committee filed a 61-page opposition to his privilege assertions, girded by another 140 pages of exhibits. (How you livin’, Merrick Garland?)

Bolstered by testimony from administration and campaign officials that Trump was repeatedly told his electoral fraud claims were without merit and Eastman’s legal theories were patently illegal, the Committee claims “at minimum, a good-faith basis for concluding that President Trump has violated section 18 U.S.C. § 1512(c)(2),” which criminalizes obstructing or attempting to obstruct  “an official proceeding of the United States.” They also assert “a good-faith basis for concluding” that Trump and Eastman engaged in a “criminal conspiracy to defraud the United States,” and may have committed common law fraud by knowingly spreading lies about non-existent election fraud and thus the court “should conduct an in camera review of the documents to determine whether the crime-fraud exception applies.”

But if Judge Carter doesn’t bite on that one — which honestly seems geared as much toward the attorney general as the Central District of California — the Committee has plenty of other reasons why attorney-client privilege should not apply here.

For instance, the engagement letter from the Trump campaign which Eastman finally produced two weeks ago, is unsigned by either Eastman or a representative of the campaign and states that it will only become effective “upon the proper signatures by all parties hereto.” Moreover, the plaintiff “provided no declaration from his client regarding the scope of his representation.”

As for Eastman’s insistence that his correspondence is attorney work product, the Committee argues that “Plaintiff has failed to meet his burden to establish that these materials were prepared in anticipation of litigation, as opposed to primarily for another purpose,” i.e., convincing Mike Pence that he had the power to change the outcome of an election by fiat.

“Conduct that is ‘merely unethical, as opposed to illegal’ is ‘enough to vitiate the work product doctrine’ here,” they urge the court.

As for Eastman’s claim that he’s in privity with pretty much everyone who ever cast a ballot, the Committee notes that “Plaintiff did not identify a single common interest agreement. Plaintiff’s self-serving assertion of a common interest ‘on information and belief’ and conclusory claims about a general common interest—as opposed to an actual agreement—do not satisfy his burden to show that these third parties were brought within the ambit of the privilege such that inclusion of these third parties did not destroy any privilege.”

But it’s Eastman’s own big mouth that got him in the most trouble here (well, besides the whole alleged crime thing). Because until about five minutes before this case was filed, that guy spent an entire year flapping his yap about the legal theories he’d cooked up to justify overturning the election.

He blasted his ridiculous memos to half the Republicans in DC, including at least one senator, and then broadcast his theories to the mob at the January 6 rally on the Ellipse. When it all went sideways, he embarked on a disastrous publicity blitz, even calling himself a “white-knight hero here, talking [Trump] down from the more aggressive position,” in a disastrous interview with the National Review.

If a privilege ever did exist, there’s certainly a colorable argument that it was long ago waived by Eastman’s incessant babbling.

But even if the DOJ doesn’t ever charge Eastman in connection with the alleged conduct — don’t hold your breath! — he’s probably in a bit of sticky wicket with the State Bar of California, which confirmed this week that it is investigating Eastman’s conduct.

In one particularly damning exchange with Mike Pence’s counsel Greg Jacob, Eastman acknowledges that it would be illegal to violate the Electoral Count Act, but urges the vice president to do it anyway.

The Senate and House have both violated the Electoral Count Act this evening – they debated the Arizona objections for more than two hours. […] So now that the precedent has been set that the Electoral Count Act is not quite so sacrosanct as was previously claimed, I ask for you to consider one more relatively minor violation and adjourn for 10 days to allow the legislatures to finish their investigations, as well as to allow a full forensic audit of the massive amount of illegal activity that has occurred here.

Is it cool to advise a client to violate federal law? Guess our pal John Eastman is about to find out.

Liz Dye lives in Baltimore where she writes about law and politics.

Thu Mar 10 , 2022
Balenciaga sent out cracked iPhones as invitations. Luxury fashion house Balenciaga is once again in the news – this time for its unique invites. Ditching traditional paper or digital invitations, the French label instead used smashed Apple iPhones to invite guests to its Autumn/Winter 2022 show at Paris Fashion Week. […] 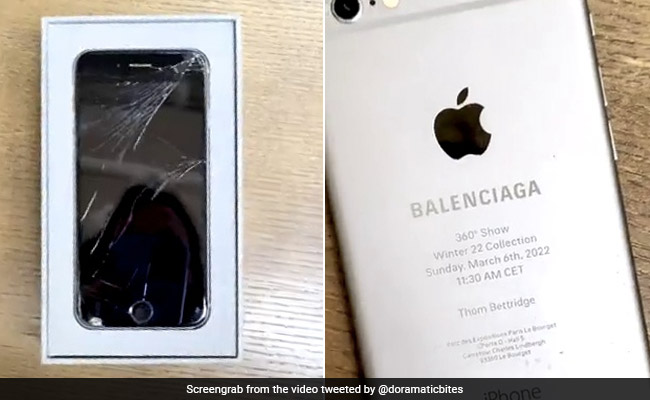