Kirkland & Ellis chairman Jon Ballis holds a trump card in the legal industry’s desperate battle for talent: he can pay more than just about anybody else. Some partners at the world’s largest law firm earn more than $20 million a year, according to a former shareholder.

Name a rival—Wachtell, Lipton, Rosen & Katz; Cravath, Swaine & Moore; Simpson Thacher & Bartlett—and Kirkland has poached from them. But now, Ballis finds that dangling eight-figure paychecks and the allure of doing billions of dollars worth of deals for private equity heavyweights like Bain Capital doesn’t always cut it.

So for the first time, he wants to address head-on the thing he thinks is limiting Kirkland from reaching even greater heights: Too many recruits think his firm is a den of wolves, where “sharp-elbowed” lawyers work grueling hours while looking out for their own good.

“I know this sounds insecure, but I hear often that you are a tough place to work, and it’s not worth it,” Ballis said in a series of interviews in recent months. “That conversation happens often. And that’s how I know that this reputational thing is a problem.”

Big Law firms rarely admit problems. Clients pay them as much as $2,000 an hour to never be wrong. Kirkland in particular has never cared to explain itself as it offered pro athlete-sized pay packages to lure lawyers from partnerships that used to last a lifetime. Rivals bemoan the “Kirklandization” of law, painting the firm and the lawyers it hires as mercenaries.

The demands of billing 2,500 to 3,000 hours a year, though, has come at a cost. Big Law firms are facing a retention crisis and Kirkland is no exception. More than 325 of its associates left in 2021—up more than 70% from 2020, according to data from Leopard Solutions and a Bloomberg Law analysis of LinkedIn profiles. It’s a major challenge for a firm that only expects its workload to grow.

Kirkland’s reputation has been around so long, it’s hard to determine where it even began. References to the firm as a pack of “wolves in wolves clothing” have circulated for decades.

That makes Ballis’ task all the more difficult.

Soon after he became Kirkland’s chairman in 2020, Ballis remembers, he tried to woo a partner from a rival firm in London. The potential hire would’ve filled a hole in the firm’s antitrust practice, convincing regulators that transformational corporate deals won’t harm consumers. It’s an important job for law firms these days, and especially for the firm that last year handled more M&A deals than anybody.

She’d be part of a team at Kirkland doing more important, interesting work than anywhere else, Ballis told her.

The potential hire demurred, telling Ballis she wasn’t planning to leave her firm. Three months later, he learned she’d joined a different firm. Whatever her actual reasons, Ballis took it as confirmation that Kirkland has a branding problem.

While Ballis admits Kirkland demands much of its people, his argument that the firm is misunderstood boils down to this: He says it’s been working to ferret out selfish, greedy behavior for more than a decade. The description of its so-called “eat-what-you kill” compensation system, which has bred part of its reputation, is a mischaracterization, he says. And his own leadership style, characterized by a dedication to managing the firm like a sports team, represents its dedication to a high-performance, collaborative culture.

“We have a system that demands a lot from people, gives them a lot of responsibility, and requires people to work together,” Ballis said. “And if you don’t want to work together, we’re not your kind of firm.”

Many in the legal industry laugh at the idea that Kirkland has quietly changed its style.

“It’s not a good culture,” said one former share partner who left the firm recently. “There is an arrogance that we’re the best. We’re Goldman Sachs or McKinsey of the law firm world. We can destroy everybody else, and let’s actually go destroy other people.”

From Sidley, With Love

As a high school senior on Chicago’s north side, Ballis captained the Highland Park High School basketball team to a 1-23 record. The 5’6″ point guard was known for passing and out-working everybody on the court, according to his high school teammate, Jon Gray, who is now a client and chief operating officer at , one of the largest alternative investment management companies in the world.

“I’m not surprised at all he ended up being very successful,” Gray said of Ballis. “Because Jon was so driven and cared so much and was a tenacious competitor.”

Ballis graduated with a Soviet studies major from Lehigh University in 1991, took out loans to go to Harvard Law School, and returned to Chicago to work at Sidley Austin. By 2005, his practice was virtually all private equity work, and he found himself routinely across the table from Kirkland lawyers. He liked how private equity clients expected him to solve their problems, rather than just offer advice.

“He’s someone who makes you want to run through walls and he does it by earning it,” David Hutchins, a former Kirkland lawyer who’s now a client at Bain Capital, said of Ballis. “You see what type of lawyer he is and you want to be that.”

Ballis joined Kirkland after a recruiting lunch at the Mid-America Club atop Chicago’s 83-floor Aon Building with Jeff Hammes.

Hammes led the firm from 2009 to 2019, and is credited with orchestrating Kirkland’s rise to the top by cutting huge checks to lure up-and-coming partners from the most prominent Wall Street firms.

He took advantage of what he saw as a hole in his competitors’ armor: They paid their lawyers based on how long they’d worked for the firm, not in proportion to their individual contributions. To Hammes, it meant young, talented partners could feel stymied. He promised them more control over their futures, and doubled or tripled their salaries.

Litigator Sandra Goldstein was paid $11 million a year to join Kirkland in 2018, according to the New York Times. She joined from Cravath, which paid its average partner $4.6 million that year, data compiled by The American Lawyer show.

The tenure-based compensation system used by elite firms like Cravath since the 1970s was branded “lockstep.” Firms advertised it as crucial to their willingness to pick the right lawyer for every job without arguing over pay.

Hammes worked hard to break that culture, Kirkland partners said. He eliminated the concept of “billing partners” who earn credit for work done by clients they brought into the fold.

Today, only two major law firms maintain a pure lockstep model. The rest have been forced to pay their most important lawyers more money so they won’t be plucked away.

How well you contribute to Kirkland’s overall success is now what drives compensation decisions, firm leaders say. The firm resets partners’ allocation of shares every other year, and the key questions reward behavior that leaders view as putting the firm first.

For instance, how much business you generated, how many lawyers you brought in to work on your matters or whether you gave up a client so the firm could advise its more lucrative adversary.

Edward Sassower, who leads Kirkland’s bankruptcy practice, said the firm could be a “rough place at times” when he first joined in 2003, but he now views it as “the most collaborative Big Law firm in the world.”

“It took a lot of work to get here from there,” he said. “In those early days, Jeff sometimes had to threaten the loss of shares to promote good team work. Now that’s such a part of who we are that it happens naturally.”

Kirkland’s leaders also said the firm has taken steps to become a more diverse, inclusive workplace. Like many large firms, though, it declined to provide diversity statistics of its recent partnership classes.

Part of the culture change has been required by the scale of Kirkland’s business.

The firm’s roster of investment funds went from 100 clients in 2016 to more than 700 in 2021, said John O’Neil, who heads Kirkland’s investment funds practice. He credits the growth in part to hiring partners with no billing responsibilities who manage client relationships and hand off work to the most logical teams of lawyers. 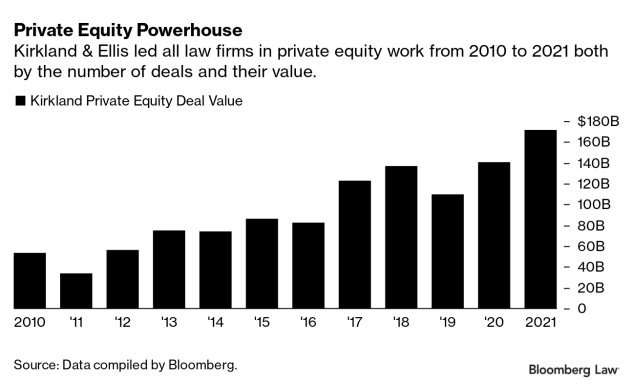 One former share partner said it didn’t ring true that Kirkland had quietly transformed into a collaborator’s dream. The partner had difficulty bringing in clients that others deemed too small—and he said he didn’t get any credit for agreeing to pass up those opportunities.

“Collegiality and everything, talk is cheap,” the former partner said. “It’s very dependent upon who you are. If you’re a private equity guy with a couple of big clients, I’m sure everyone is very collegial at that level.”

Ballis was selected the firm’s chairman in 2018 by a group of senior partners. There was no vote; he was the consensus choice. He served as chair-elect for a year.

The Covid-19 pandemic was declared a national emergency just 68 days into his job as chairman. “This is not in the playbook of how to run this law firm,” he remembers thinking.

From 2009 to 2019, the firm’s revenue increased 11.5% per year on average while its profits per equity partner rose 7.6%, the American Lawyer reported. If Ballis can replicate those growth rates over another 10-year period, he’d be leading a law firm that’s bringing in more than $14 billion a year and paying its average shareholding partner more than $10 million a year.

But early in the pandemic, lockdowns and closed courtrooms threatened to make that kind of growth an impossibility.

Revenue in 2020 grew more than 16% while profits per partner soared nearly 20% to $6.2 million. Ballis declined to provide 2021 financial figures, citing the firm’s fiscal year ending in March. But there’s good reason to believe the firm did even better in 2021, considering that it set a record for activity levels in its M&A practice, according to data compiled by Bloomberg.

“It’s not irrational to think, ‘Oh my goodness how are we going to do better than this?’” Ballis said. “I will tell you with full candor, I see tremendous opportunity and upside.” 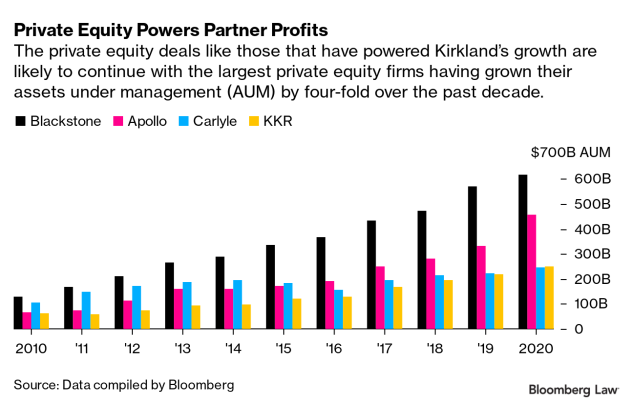 The surge in demand has forced Kirkland into a hiring binge during a year in which the 50 largest firms saw compensation costs soar 16.5%, according to Citi Private Bank.

For its part, Kirkland disputed its attrition in 2021 had grown more than 70% from a year prior, putting it instead at 59%. It says attrition grew 50% from a more normal 2019 to 2021, and that the poaching by other law firms is indicative of the value that Kirkland experience adds to a lawyer’s resume.

The firm’s hiring strategy acknowledges the bargaining power junior lawyers now hold. Kirkland opened offices in Austin, Texas, and Salt Lake City, Utah, just to access people in places where they were already living. And it shaved a year off how long it takes before lawyers are considered for the life-changing status of holding shares in Kirkland’s profits.

There’s no sign Kirkland or other Big Law firms will be asking their lawyers to work less. Ballis is unapologetic about the firm challenging its lawyers. He wants people like him who relish the hard work.

But he wants them to believe that at Kirkland they’ll be doing it with a group of people who play well together. And his reasons for making the sales pitch are pragmatic: Kirkland’s reputation is making it harder to win the next game on his schedule.

“We’re like college sports: The players pick us,” he said. “And the misconception of who we are is not helpful to our institution.” 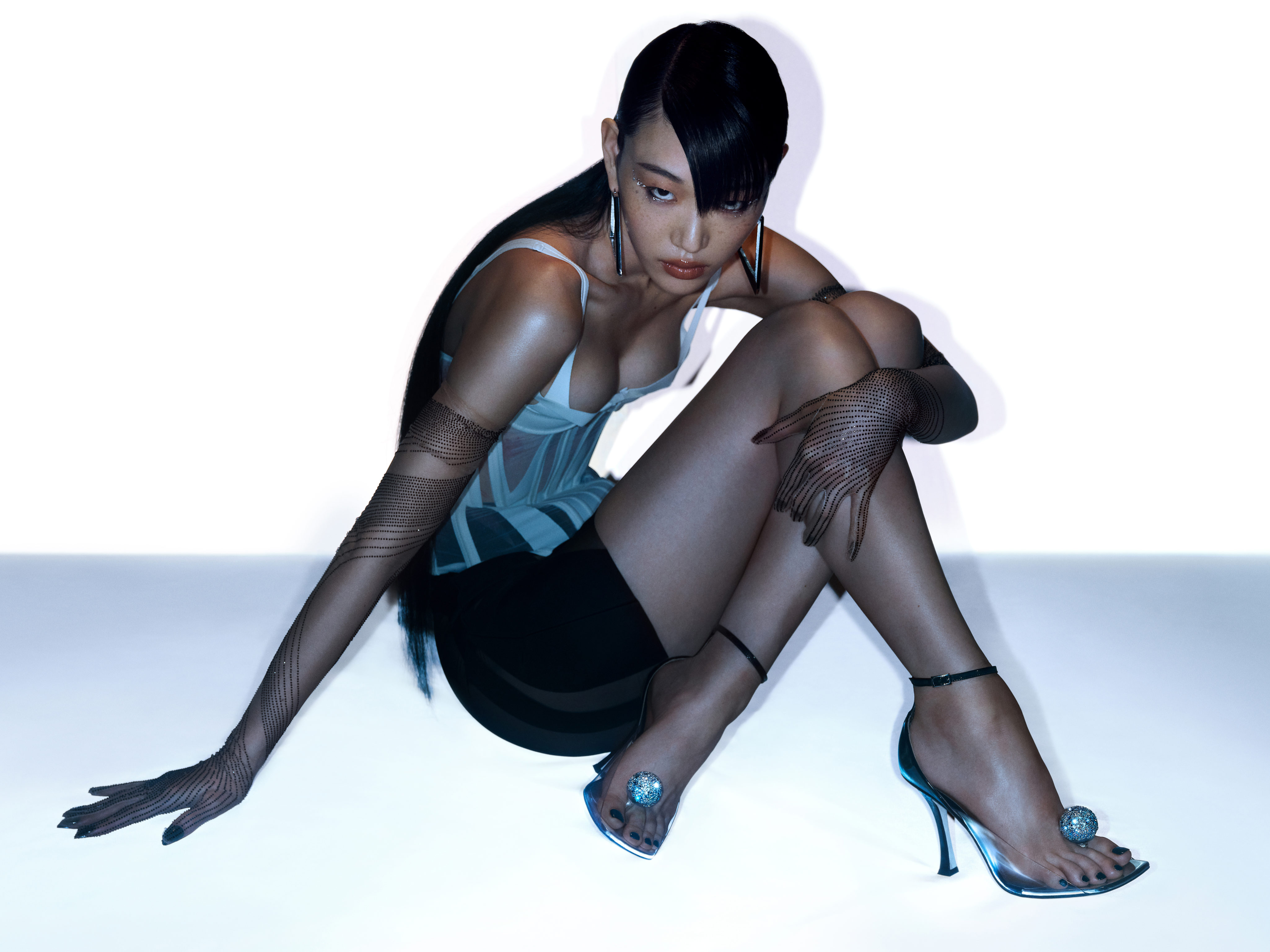