Students, faculty and communities want to be associated with colleges and universities that are thriving. Factors such as curricula, research activities, rankings, studies abroad, distinguished alumni lists, ethnic diversity programs, state-of-the-art facilities and return on investment can indicate an institution’s growth in academic status and influence, some experts say.

Others say colleges and universities that embrace a generational cohort that includes diverse millennials and Generation Z students – postmillennials born between 1997 and 2012 – are part of a high-profile trend among colleges on the cutting edge.

Experts in the higher education realm point to some distinct attributes of colleges that are rising, as opposed to schools that are holding steady or declining.

“There are several signs that a college is on the rise,” Lynn Pasquerella, president of the American Association of Colleges and Universities, wrote in an email. “While many might cite enrollment trends, AAC&U focuses on increases in graduation rates, social mobility and the closing of equity gaps. In addition, we pay attention to curricular innovation; access for all students to High Impact Practices, such as internships, first-year seminars, undergraduate research, and study abroad; and the implementation of holistic advising.”

“This requires making data-informed, equity-driven decisions that center students and their needs, with particular attention to students who have long been underserved and marginalized by higher education,” Voight adds. “These colleges on the rise understand that institutional barriers contribute to inequitable postsecondary outcomes and use data to identify and remove systemic barriers to success.”

She cited as an example IHEP’s Degrees When Due, a nationwide initiative to award academic credentials to students who had earned them but not received them, and to reengage college dropouts. Almost 200 schools have participated since DWD’s launch in 2018, Voight says, and nearly 1 in 10 students whose degrees were audited in the program had met requirements for a degree but the degree was never conferred – often because of bureaucratic hurdles like incomplete paperwork or holds on the students’ accounts.

“A college on the rise commits to this type of smart data use – and pledges to act upon the results,” Voight says.

Stella M. Flores, associate professor of higher education and public policy in the Department of Educational Leadership and Policy at the University of Texas—Austin, says higher education in the U.S. “is in crisis,” citing decreased college enrollment, lower birth rates and college closings. There are clear equity implications, she says.

“The competition is now for high-paying students that are likely to succeed in graduating college,” Flores wrote in an email. “The reality is that the new demography of students is going to be low-income and minority students who are likely to be first- or maybe second-generation college students. Their parents may be struggling with student debt even if they have graduated from college.”

Equity efforts are part of a broader focus on student success that characterizes colleges on the rise, experts say. How schools are addressing student success in response to the coronavirus pandemic is telling, Voight says.

“A college on the rise recognizes the immense potential of the 36 million Americans who had some college experience and no degree before the pandemic, along with the lost opportunity for the students whose studies were disrupted by the turmoil caused by COVID-19,” she says. “These rising colleges seek out those who have not started their postsecondary journey as well as those who have begun, and not yet completed. Ultimately, they embrace their role in sparking mobility through college completion to change the lives of individuals and families, while also building a stronger economy, more robust workforce, and more vibrant communities.”

Flores says college access and success would improve for more students if colleges and those that rank them placed less emphasis on factors such as standardized test scores – which are “one-shot portraits and do not consider the forms of inequality that have gone into test scores” – and more attention on diversity, support of low-income families and institutional accountability to the surrounding community.

That kind of college, she says, “I would have great pride in as a vehicle of American opportunity.”

A high level of community engagement at the regional, national and international levels is another strong sign of a college on the rise, says John LaBrie, dean of the School of Professional Studies and associate provost for professional education at Clark University in Massachusetts.

“Are faculty being seen as thought leaders in their academic fields? Is the popular press quoting both faculty and administrators on various topics in their publications and stories? Are the sports teams making it to championships and playing in key tournaments? This type of externally focused engagement can go a long way in projecting to the wider community that a school is dynamic and interesting.”

Pasquerella, a former college president, says this aspect is critical now due to some distrust of higher education in general and concerns that a college degree may not be worth the investment.

An increasingly significant factor of colleges on the rise is how they position themselves as anchor institutions in communities and demonstrate that their success is intertwined with the economic, educational, psychological and social well-being of those communities, she says.

“This, in turn, often requires reevaluating the criteria on which tenure and promotion are awarded to include community engagement and the establishment of reciprocal community partnerships,” Pasquerella says.

Faculty promotion and tenure traditionally have been linked primarily to factors such as a professor’s level of research and published writing, while time and effort spent engaging in student mentoring and voluntary community engagement are less valued in the tenure appointment process.

“In my mind, a school that is exceptionally well branded in the market is often also well poised to be a school on the rise when that school’s brand is consistent with a highly valued societal need,” says LaBrie, an expert on the credentials of higher education institutions.

“For example, if students and parents are demanding an ROI, return on their investment, then a university that is well known and respected for its career placements and industry-aligned programs is well positioned to be a rising star.”

Among colleges on the rise, a key characteristic is money. Some schools are investing more dramatically in grant procurement and development operations to increase their chances of securing such funds, Flores says.

“College reputations are often responding to external factors set by market, donor and government forces,” Flores says. “Access to high-dollar grants for research – which fund not only the researchers, but students and the university overhead – play a major role in how colleges are often ranked. These grants sustain universities and faculty, for example, and create incentives to apply for more grants, which is not a bad outcome on average.“

Colleges must have the resources to sustain wealth in order to survive, Flores adds. However, the colleges that need the most resources are likely to be the ones “with less networking histories with the forces that grant this rising and thriving status – broad access institutions, community colleges, and many Minority-Serving Institutions,” she says.

Those institutions will have a much harder time rising “unless we change our priorities on what colleges we want to lift for the most economic and social impact of the nation,” she says.

Colleges and universities are on the rise “when a confluence of attributes all seem to coalesce over a relatively short period of time,” LaBrie says.

“These attributes can include things like growing pools of student applications, major philanthropic gifts, new research and academic launches or a growing campus footprint. If the school is able to authentically project this sort of diverse set of achievements over a period of time, they will be thought of by their peers as a school on the rise.”

Thu May 19 , 2022
On March 25, law students and professors alike descended on The Story Venue on West Franklin Street. They dressed up and came together for the Carolina Public Interest Law Organization’s annual auction. The cause? To raise money for students taking unpaid internships over the summer, specifically those partaking in “public […] 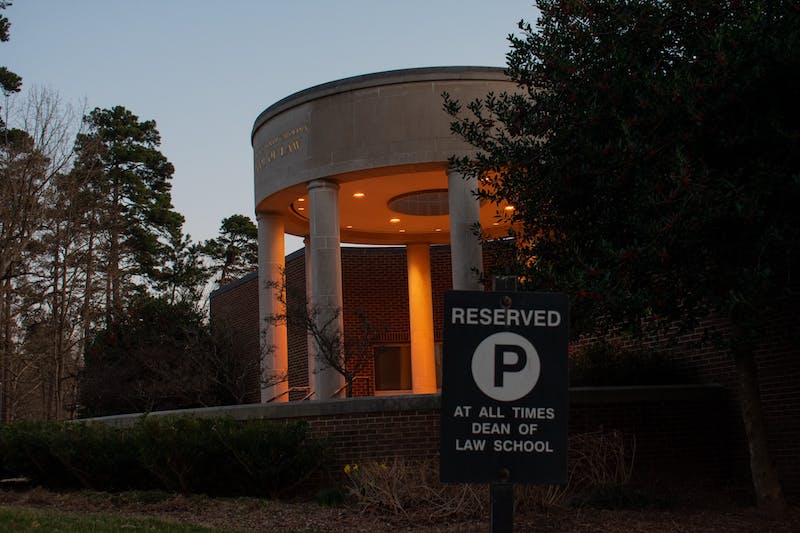