On the 124th day of his rooftop vigil to raise funds for a transformative community center on the South Side of Chicago, Pastor Corey Brooks met with John Kugler, a lifelong educator and a former employee of the Chicago Teachers Union. Though Kugler comes from the left end of the political spectrum, the pastor wanted to hear his insider views on why the Chicago Public Schools are failing so many kids. There were differences of opinion at times, but both community servants found much to agree upon.

“We’re going to start by [having you] describe who you are and what your past role was on the CTU, Chicago’s Teacher Union,” the pastor began.

“I appreciate you having me on your roof here, and I appreciate everything you’re doing,” Kugler said. “We need more people like you doing this and taking a stand … That’s the thing I think that we’ve lost in our city and our country, that people are afraid to take stands because they’re afraid of being attacked.”

“I’m a licensed educator throughout the state of Illinois. I’m licensed to teach vocational ed and CTE, in short, that’s shop. I used to teach carpentry and drafting right down the street at Hyde Park Career Academy. My last job was at the Chicago Teachers Union. I was a field representative, meaning I protected people’s rights and contractual rights and enforced rules of the contract and enforced rules in the schools,” Kugler said. “I don’t work at the Chicago Teachers Union anymore. It was an involuntary separation. We’ll call it that— nice language, okay?”

“The biggest positive is that it’s a conglomerate of all different people, different sides of the city, different races, different ethnicities, different income levels, different generations, different education levels,” Kugler said. “The problem is the people. If you have certain people running it and they abuse that power and that authority and they use it for personal or political gain, that’s the problem.”

Kugler added: “I started seeing that people were not focusing on individuals and community. They started focusing on politics. And politics is politics — they come and go — but education is something that needs to be steady, it needs to be consistent, and education needs to be about the people in the community, not about what you believe in.”

“How does that happen in a country like America, in a city like Chicago?” the pastor asked.

“Because there’s no checks and balances … There’s no accountability, there’s no reliability, there’s no consistency,” Kugler said. “When I used to teach at Hyde Park Career Academy … it took me two weeks to figure out one of my students couldn’t read. I asked him a few times, can he read a passage for me and read what was written down? And then finally, I addressed it and said, ‘You can’t read, can you?’ And he was sad, and he put his head down and he goes, ‘Well, what are you going to do about it, Dr. Kugler?’ I said, ‘Well, you’re 18 years old … learn carpentry. I’ll teach you the skill. And if you want to learn how to read, that’s an easy thing. I mean, it’s a little more difficult when you’re older, but let’s get you on the right foot. Let’s get you the things that you need to survive first, because you’re already 18, and then we can talk about reading.’ But in the end, that started me thinking where it went wrong, right? How does an 18-year-old get to be in high school and not be able to read?”

“It’s gone really wrong,” the pastor said. “I’ve heard the Chicago’s Teachers Union be called a jobs corp, because a lot of people feel like that the teachers union is more concerned about jobs for teachers and jobs for people in the union, than they are the children being able to read. How do you balance that?”

“From a guy from the inside, I don’t know where you got that narrative, but they’re not protecting people’s jobs. There was over 1,000 to 2,000 people fired 12 years ago. Most of them were African Americans. You know how many of them got their jobs back? Barely any,” Kugler answered. “There was just a lawsuit that they won for $12 million or $10 million. You know who got most of the money? A lawyer got the money that was connected to the union. She was the mother of somebody.”

“Would you call that corruption?”

“Oh yeah, a hundred percent. Corruption with a big C.”

“So how do we deal with the corruption of the Chicago’s Teachers Union versus dealing with the children? Because it seems like to me all the kids are being left out,” the pastor said.

“There’s an election coming up: May 20th. They should un-elect them. That’s the first step, right? And the second step, if there is corruption, which I’m good at [fighting] – I’ve put a few people in prison in my job – we need to start looking at what they’re doing with the money,” Kugler said. “Why isn’t the money from the union dues helping the members be better teachers, so they can better serve the communities we need?”

“Oh, a hundred percent that’s not happening. Oh, no. Most of the money that we’ve been looking into lately has been going towards politics. They’ve been diverting union dues for politics,” Kugler answered. “We gave [Michael] Madigan a bunch of money.”

Madigan, the former speaker of the Illinois House of Representatives and the most powerful state politician for decades, was recently charged with 22 federal felonies.

“Look, I’m going to be honest. I’m a leftist, all right?” Kugler said.

“And I’m a rightist,” the pastor countered.

“Left and right, there we go. We’re whole now, brother,” Kugler smiled. “I’m supposed to be revolutionary, I’m supposed to be for all of this stuff, and I walk into an office and I see Mike Madigan inside the union. What’s he doing here? We’re supposed to be fighting him, and then he’s drinking alcohol with dues money?”

“How does the Chicago Teachers Union use funds to get involved in political situations?” the pastor questioned.

“My view is it’s illegal,” Kugler responded. “What the union does, and especially the Chicago Teachers Union, it says, ‘We have a program. We want to institute change, say, in three wards.’ So they mask political contributions through work in those communities, and they pass through dues money through local organizations to do political work for them.”

Kugler continued: “The explanation that I got from the union when I filed multiple complaints about them using dues for politics is, ‘We’re a private organization. The union members elected us. We’re in power now, we can do whatever we want.’”

“How do we stop the teachers union from having so much power, unchecked power?”

“We need to change our city block by block. We need to organize. I’m an organizer,” Kugler answered. “It’s time to get rid of the leadership of the Chicago Teachers Union … What we need to do is change that power dynamic and say that the power lies in the streets, in the blocks and the people that we serve. That’s what we need to change, and we need to organize, and we need to remove people from power that are like that. If they don’t go voluntarily through elections, then we do other things, right? Then we prosecute.”

“Whatever it takes to keep people accountable.”

“Schools have basically taken the trades out.”

“It was done on purpose.”

“Chicago Public Schools systemically destroyed the vocational programs in our city. There used to be 80 carpentry teachers in the city of Chicago. There’s two or three today. There’s two or three mechanics programs in the city of Chicago with three million people. We’ve got all these cars. Who’s going to fix it? Chicago Public Schools destroyed them,” Kugler said.

Kugler picked up his phone.

“Everybody has one of these. Why aren’t we teaching kids how to fix a phone?”

“You’re right,” the pastor said. “If we wait on government, if we wait on the school system to do it, we’re going to be waiting years.”

“Me and you ain’t going to be around no more, my brother.”

“So we have to do it now. That’s what Project H.O.O.D. is trying to do. We’re trying to create, we’re going to build this center so we can teach the trades, and hopefully you can stop by and help us show some kids some carpentry, because that’s what it’s really all about.”

Follow along as Fox News checks in Pastor Corey Brooks each day with a new Rooftop Revelation.

Eli Steele is a documentary filmmaker and writer. His latest film is “What Killed Michael Brown?” Twitter: @Hebro_Steele.

Fri Mar 25 , 2022
Boho nursery decor ideas allow for you to be super creative as there are no set rules. A Boho inspired scheme is defined by an eclectic mix of varying styles, making it ever-changing and unique. A Boho look is often described as unconventional and relaxed, rich with culture and history, […] 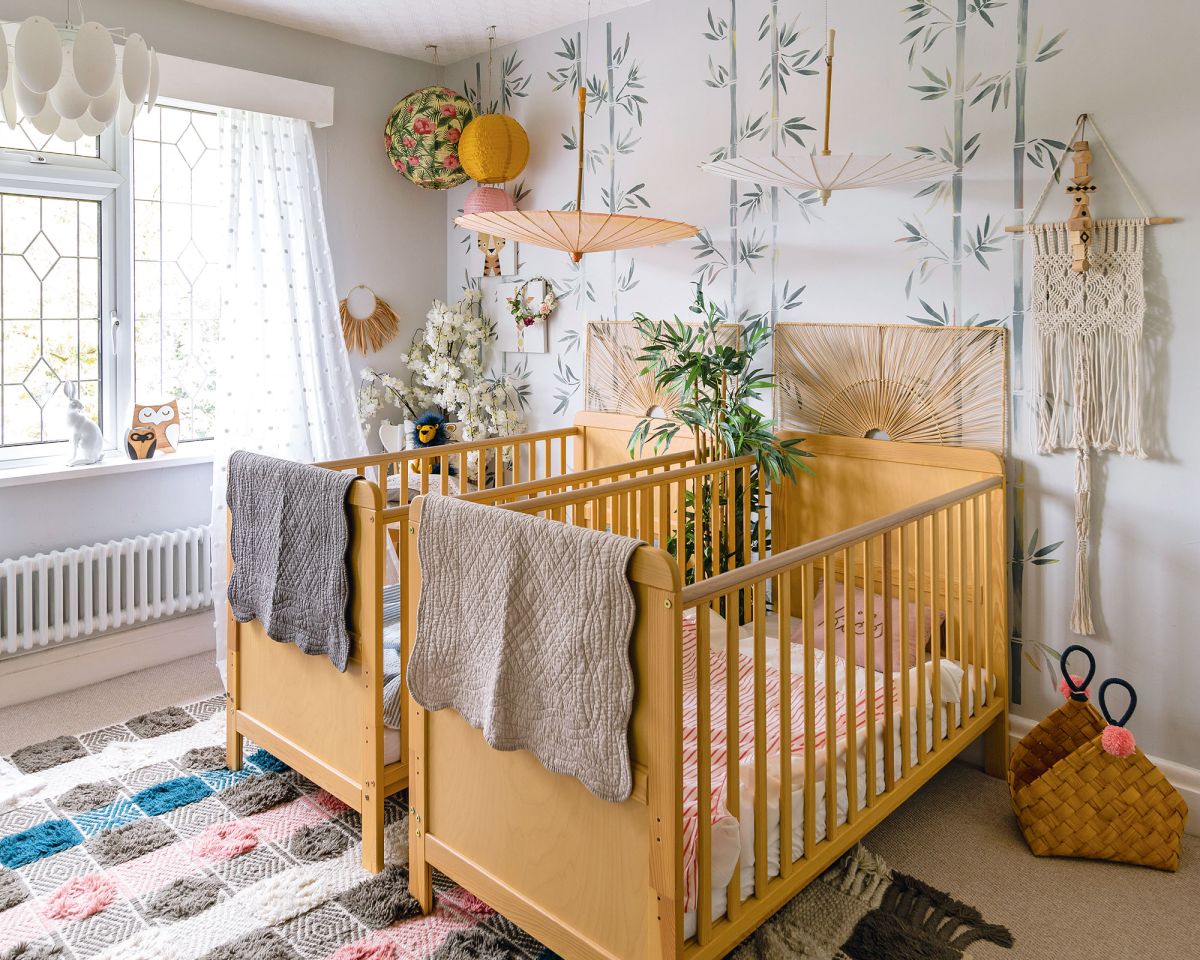