HUDSON — A popular Pasco County middle school principal is seeking public support as he fights plans to remove him from his post of the past eight years.

Joe Musselman, appointed in 2014 by superintendent Kurt Browning to lead Hudson Middle School as part of a major turnaround effort, has been recommended for demotion to a grant specialist post in the district student services department upon his return from surgery.

The School Board will consider the proposed change Tuesday. Browning has placed retired school leader Angie Stone at the helm of the school, now called Hudson Academy, while Musselman is on leave and told him that he won’t be returning to the campus.

That news prompted Musselman and his wife, Rebecca, also a high-level district administrator, to push back. And they’re asking for help through GoFundMe to raise money for legal fees “associated with Joe’s pursuit of what is right.”

“He was involuntarily moved without cause,” Rebecca Musselman wrote on the GoFundMe page. “Joe is a warrior and will stand up for what is right.”

Musselman has filed a grievance against the administration, saying he was discriminated against when he was not offered accommodations as he asked for Family Medical Leave. He has called on the School Board to investigate the legitimacy of his transfer and demotion.

The Musselmans did not respond to phone and email requests for comment.

Board members and district administrators said they would not discuss the situation because it is the subject of legal proceedings.

The district provided public records indicating that Musselman’s performance at Hudson had been under scrutiny for months. Those included notes from several meetings with assistant superintendent Marcy Hetzler-Nettles and chief academic officer Vanessa Hilton, in which they raise concerns about the way Musselman was running the school.

Issues ranged from a lack of cleanliness of the school grounds to missing performance evaluations for more than half the staff. The school did not have a requested branding plan for its transformation to a Cambridge curriculum, they wrote, and some key job vacancies were not being advertised.

The district delayed and then canceled a dedication of the renovated school in the fall, with officials saying they could not bring members of the community to the campus in the state it was in.

In an Oct. 27 memorandum, Hetzler-Nettles said she appreciated Musselman’s experience, patience and commitment to the community. What she questioned, she wrote, was his school management abilities.

“Since August, I have made 9 visits to the campus and have observed and shared many repeat issues, centering around cleanliness, organization and lack of branding,” Hetzler-Nettles wrote. “There has not been proactive planning or monitoring to ensure follow through for these areas. Staffing shortages have not been adjusted for as things haven’t gone as planned.

“And while you state you have the best intentions, as we’ve previously discussed, your delivery does not match your intent.”

That message permeated letters and memos that followed. By December, Hetzler-Nettles advised Musselman that the uncertainty of his planned medical leave combined with his leadership deficiencies would lead to a recommendation for demotion or nonrenewal.

In a Jan. 6 correspondence with Browning, Musselman challenged Hetzler-Nettles’ rationale. He contended she was too focused on cleaning without regard to bigger issues the school faced.

“I asked her which should be my priority — investigating a threat to shoot up the school (which I was in the midst of conducting with our school SRO) or ensuring each room was free from crumbs and half-filled garbage cans while we are currently down three custodial positions,” he wrote. “Rather than answer, she reiterated her intent to recommend my demotion.”

On the GoFundMe page, which had generated $1,300 in mostly anonymous donations by Thursday morning, Rebecca Musselman called her husband a fighter, and said he had dedicated 23 years of his life to the Pasco school district.

Musselman first joined the district in January 1999 as a teacher at Anclote Elementary.

“This is not just for Joe, but for those before him who may have had a similar experience and those that may come after him,” Rebecca Musselman wrote. “As one of his colleagues stated, ‘If it can happen to Joe, it can happen to anyone.’ ”

After the page gained attention in the district office, she removed most of the wording, replacing it with two sentences thanking anyone who contributed.

Sun Jan 16 , 2022
The big story: Florida’s constitution says that every county in the state is a school district, with its own independently elected school board members, unless voters decide to merge their districts. That means Florida has some of the biggest school districts in the nation — five of the top 10 […] 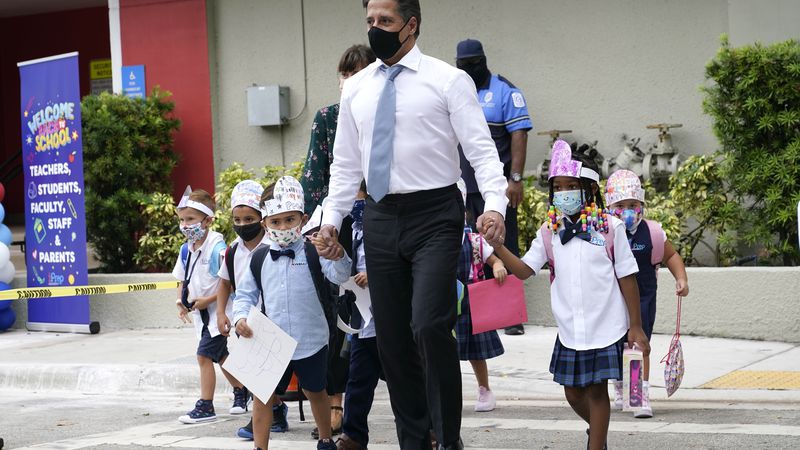