MILAN — Outside Milan’s luxury runway shows on Friday, two Ukrainian students held aloft signs reading “No World War III” and “No Putin” to draw attention to the war in their homeland and to urge the West to take harsher measures.

Their goal: get into photos of influencers and VIPs to remind the world of the horrors going on within Europe.

“For now, it is just sanctions and no action,” said Yulia Sayko, 24, a medical student in Milan whose family live near Lvov, near the Polish border. She in particular wants Italy and other holdout nations to shut down Russia’s access to the SWIFT international payment system.

Tori Ptaha, a 25-year-old international economics student, said she is very worried about her family in the capital, Kyiv. Then a VIP car started to leave the Versace show and the students and a companion raced to get their signs seen. “We have to get in the photos,’’ Ptaha said.

Alessandro Michele has long seen an affinity between Gucci’s stripes and adidas’ stripes — but whenever he tried to experiment, alarm bells went off. So, he made it official, with an actual collaboration between Gucci and adidas that took center stage during the preview show for next fall and winter.

Michele said the collaboration was “his longtime hidden desire.”

“Stripes and lines are incredible symbols,’’ the Gucci creative director said backstage at the brand’s Milan headquarters, where the luxury brand showed for the first time since the pandemic.

The collaboration included men’s suits in track-worthy shades of royal blue and purple with the adidas stripes down the sleeves and trousers and Gucci written under sports brand’s trefoil.

The choices for her were manifold, from a dual-brand corset over an athletic style dress, jogging suits made out of pretty patterned knitwear, paired with heels and not sneakers; or a stunning Victorian-inspired white dress with a full skirt and fully ruffled.

Headgear includes swimming caps with the adidas logo, and double-billed baseball caps allowing each brand to share prime real estate. The trefoil also appeared on big travel bags, and as a print on trousers.

“It is an experiment that can seem easy to some, but it was extremely strong,” Michele aid.

The showroom was outfitted with mirrors, which the creative director said was meant to reflect the multiplicity of fashion, how a single garment can be many things depending on how it is worn, and even changing as it ages, gets more lived in. Suits were the centerpiece of the wider collection, which he used to underline the interplay between genders, opening the show with a woman wearing an oversized double-breasted pantsuit.

Michele said that sense of gender fluidity, which made a sensation when he took over as Gucci’s creative director seven years ago, came naturally to him. “I am always walking between the genders,” he said.

The corset gave shape to Donatella Versace’s latest collection, which offered looks for women of a broad range of sizes.

The bustier appeared on its own under suits, in satiny pastels, or incorporated into slinky slip dresses, as a sort of breastplate on clinging tops and even as a detail on a long leather jacket.

The silhouette ran from loose trousers, with businesslike pinstripes or checks contrasting with bra tops under open suit jackets; or elastic pull-on Morticia-style skirts in bubblegum pink or acid green. Tweed was frayed, appearing as dress bound by a corset, or as jacket and mini-skirt sets.

Versace said the looks were built on “contrast and tension — like an elastic band pulled tight and about to snap back with a build-up of energy.”

Alberto Caliri’s second womenswear collection for Missoni was full of comfort pieces not always immediately associated with the brand, including blankets and oversized stuffed animals, alongside the knitwear that made it a luxury mainstay.

“Missoni, for me, has always had this part of cuddling, a softness,’’ Caliri said backstage. “When you need something a bit more, because you feel vulnerable. That was the idea, to work on this in an declared way.”

The blankets, he said, had a double role, one to underline Missoni as a lifestyle brand, but also to suggest using a blanket as a coverup, as seen on the runway over swim suits, or more everyday, over jeans.

The brand’s famed zig-zag was oversized in a wide trouser, paired with sweater vest with a lived-in feel; or as a sheer sweater, worn simply with denim. The sexiness that caused a stir with his first collection was still there, in a belly-revealing open front dress, worn over soft terry trousers.

“I have always been drawn to embroidery and there are very important elements throughout my design,’’ Park said. The 16-piece collection, inspired by the iconography of Korean folk art, included a dress of beaded panels resembling peacock feathers, and an intricately hand embroidered train featuring rabbits, butterflies and myriad flowers.

Just two years out of design school, Park, 25, said her first two collections have sold mostly to private clients, but there is growing interest from retailers for a demi-couture line.

“I have always loved hand-sewing, beautiful finishing, embroidery and colors,’’ Park said. “That’s my identity as a designer and what I really love. With the support of Dolce&Gabbana I was really able to have complete freedom to create something that is in my dreams.”

Sat Mar 5 , 2022
Virginia-based travel blogger Marissa Strang doesn’t come up short of helpful adventure guides and resources. To inspire others to see the world, Strang shared her top destinations of 2021 and travel trends for 2022. No vacation for her is complete without a thrill-seeking activity and ordering an Old Fashioned at […] 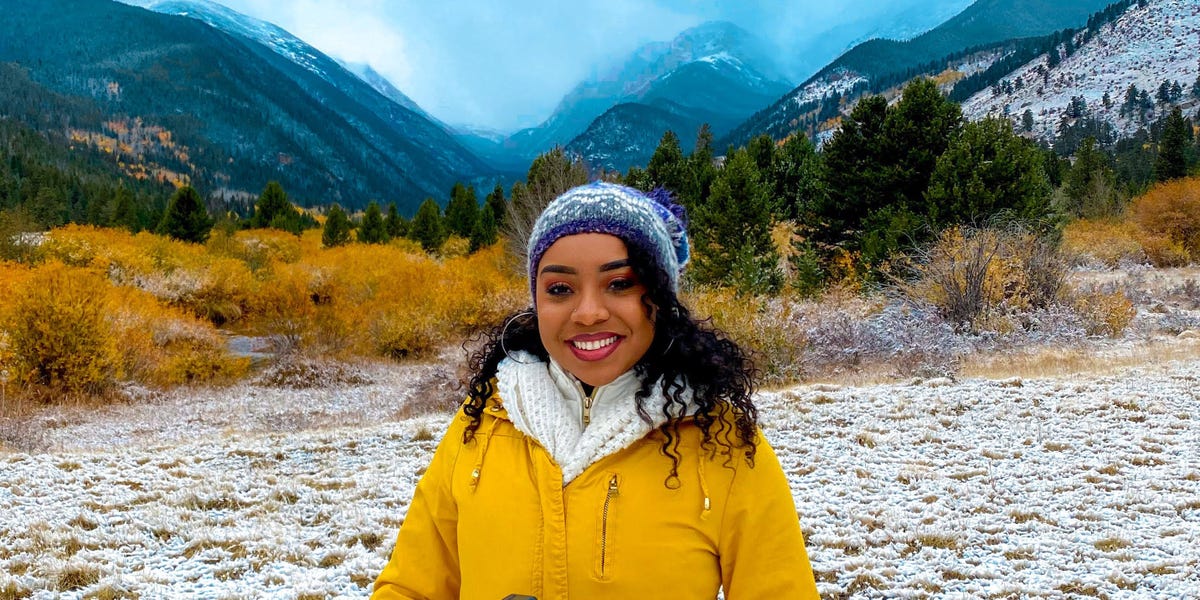