Noah Ohlsen is the 31-year-old from Miami, FL, with an enviable record in CrossFit. Renowned as one of the fittest athletes on earth, he scored second place in the 2019 CrossFit Games and most recently pulled off a team victory alongside Travis Mayer and Chandler Smith at the Wodapalooza Fitness-Festival. Passionate about pushing himself even further, Ohlsen is now eyeing up his 9th CrossFit season as an individual competitor, and has trained for around six hours each day, five days per week for the past 10 years. So how does he maintain stamina in one of the world’s most physically and mentally challenging sports?

M&F sat down with the man-machine to find out how he evolved as a CrossFit sensation, and how he keeps going when the load seems just too great.

How Noah Ohlsen Got Serious About Sports

Whether it’s weightlifting, swimming, football, or any other sport, don’t expect to make every moment count if you won’t take conditioning seriously. Ohlsen played a variety of sports in school, including soccer and baseball before developing a love of lacrosse, which he played for around a decade. “I grew up playing sports, but didn’t really get into the fitness aspect of sports, and how working out could really improve your performance, until high school,” says Ohlsen. “My nickname on the wrestling team was ‘Cutie’ and it wasn’t because I was cute, it was because I was tiny.”

Ohlsen reached for the weights and began frequenting the gym to help boost his confidence, and soon began to make physical improvements that upped his sporting game as a welcome result. “I found CrossFit in my sophomore year of college, so about four years later, that’s when [my goals] became more about performance, to move well and feel good, in addition to looking good.”

Noah Ohlsen Trains the Same Way That He Competes

There’s no doubt about it, developing your ability to maintain stamina during a session or a game requires a winner’s mentality. “Most of the time, it’s five to six days per week,” says Ohlsen when talking about his training schedule. That breaks down as Monday, Tuesday, Wednesday for gym work and then a lighter day on a Thursday, which serves typically as a rest day or low-impact day such as swimming or stretching. Then on a Friday and Saturday, Ohlsen goes hard once again with his training before taking Sunday’s off.

“Usually, with CrossFit, because there are so many different modalities and categories that we need to build our fitness in, we will [train] multiple [disciplines] in one day. So, traditionally, a training day for me, training for the CrossFit games looks like a strength training session, aerobic capacity work, a WOD where you are combining a bunch of different exercises for time, and then sometimes we will add in some accessory work that’s either going to be some bodybuilding stuff, to make sure that your body is healthy, or maybe some skill work … It’s usually all of that happening on one day, and we’ll do that on multiple days of the week, rather than having the cardio day, the gymnastics day, the strength day, just because that’s the way that we are tested in a competition, it’s not going to be broken up into different categories, so we train the way that we compete.”

The Right Fuel, at the Right Time

“It’s been interesting to watch the evolution of nutrition in the CrossFit space over the years,” says the fierce competitor. “Because at the very beginning; 10, 12 years ago, when I was first getting into it, it was all about Paleo, which is very natural, lean meats, seeds, vegetables and after a couple of years of doing that, I think that on the competitive side of things, we realised that wasn’t necessarily enough fuel. Carbohydrates are really what fuels the type of activity that we do, so you saw this kind of shift going [away] from Paleo and very low carbs.”

Working with a nutritionist, Ohlsen works towards his individual macros goals by tracking his foods. “When, I’m really dialed in on those, I feel pretty good,” he shares. “My weight is pretty consistent, and when I fall off track, I can tell. I can feel the difference.” Ohlsen loves to turbo charge his day by eating a large breakfast, often clocking it around 1,500 calories, because his training will begin an hour later. Since Ohlsen trains for most of the day without much of a break, he prefers to front load his eating like this, so that he doesn’t feel the need to stop for food midway through a session. The CrossFitter will then book-end his day with a large dinner. For convenience, the athlete will also chug down shakes, containing protein and carbohydrates, or fruit bars.

While training multiple disciplines in a single day may go against some traditional teachings that suggest the body will suffer from too much breakdown, making it impossible to improve stamina while building muscle and recovering for the next session, Noah Ohlsen has observed firsthand that his body is a very capable machine. “I studied exercise physiology in college,” says Ohlsen. “And the science says that, in theory, you can’t build muscle and lose weight, and build your aerobic capacity, and strength at the same time like, they don’t go end-to-end, but with anecdotal evidence, I’ve been training this way for 10-years and I’ve gotten faster and stronger at the same time. I’ve gotten leaner and put on muscle at the same time. So, I guess either the textbooks haven’t caught up to what we’re doing now, or we are just some sort of anomaly, I don’t know what it is.”

It may seem like this super-athlete trains without considering the need for recovery, but this is a key detail that he pays close attention to. Using a WHOOP digital fitness and health tracker, Noah Ohlsen is able to balance strain with recovery to make sure that he doesn’t overload that machine. The strain score provides positive encouragement for him to work harder, knowing that his heart rate is within safe limits. “And on the opposite side of things, I also want to see my recovery score get as high as it can,” says the competitor. “It’s always great to wake up in the morning and see that you are in the green. It’s like an instant mood boost that starts the day off on the right foot, so for me it’s been a really cool thing with the WHOOP data, just trying to hit those metrics from the work to the recovery. It feels good in the moment, and it also helps me to get fitter throughout the year.”

Pace Yourself and Go The Distance

To best understand the process of increasing your ability to compete for longer bursts, it is important to take a wholistic approach. There’s so more to stamina than simply how much oxygen you can process. From the bodyweight you are carrying around, to how much rest you’ve had before each test, there are many factors at play when it comes to optimizing your levels of stamina. And, even with all this under consideration, Ohlsen adds that improving your technique will help you push-on further still, no matter the sport.

“Being able to move well, is one of the things that allows me to move for longer periods of time,” he says. “Let’s says, the first example that comes to mind; a thruster. So, you have a barbell in the front rack and you’re doing a squat into a full press. If I can be really comfortable cycling through those [reps], getting through 20 is not gonna feel that bad but if, in my first rep, I’m already fighting against bad position and my back is hunched forward, doing five of those is going to be a struggle.”

Ohlsen shares that in the past, he had a tendency to run out of steam too early because he wanted to start every competition with 100% effort, but he has since learned, through experience, that there’s no substitute for good pacing. These days, the athlete believes that if he is able to maintain good progress with an initial 90% effort, this should give him the opportunity to find a second wind as the finish line closes in. “It doesn’t really matter how you start it matters how you finish,” shares one of the fittest men on earth.

Wed Mar 16 , 2022
Black Lollipop / Getty Images/iStockphoto People’s preference for making money from the comfort of their homes has boomed over the past two years for obvious reasons, and even with the job market trending toward normal amid the COVID pandemic, this preference has held steady — and is likely to continue. […] 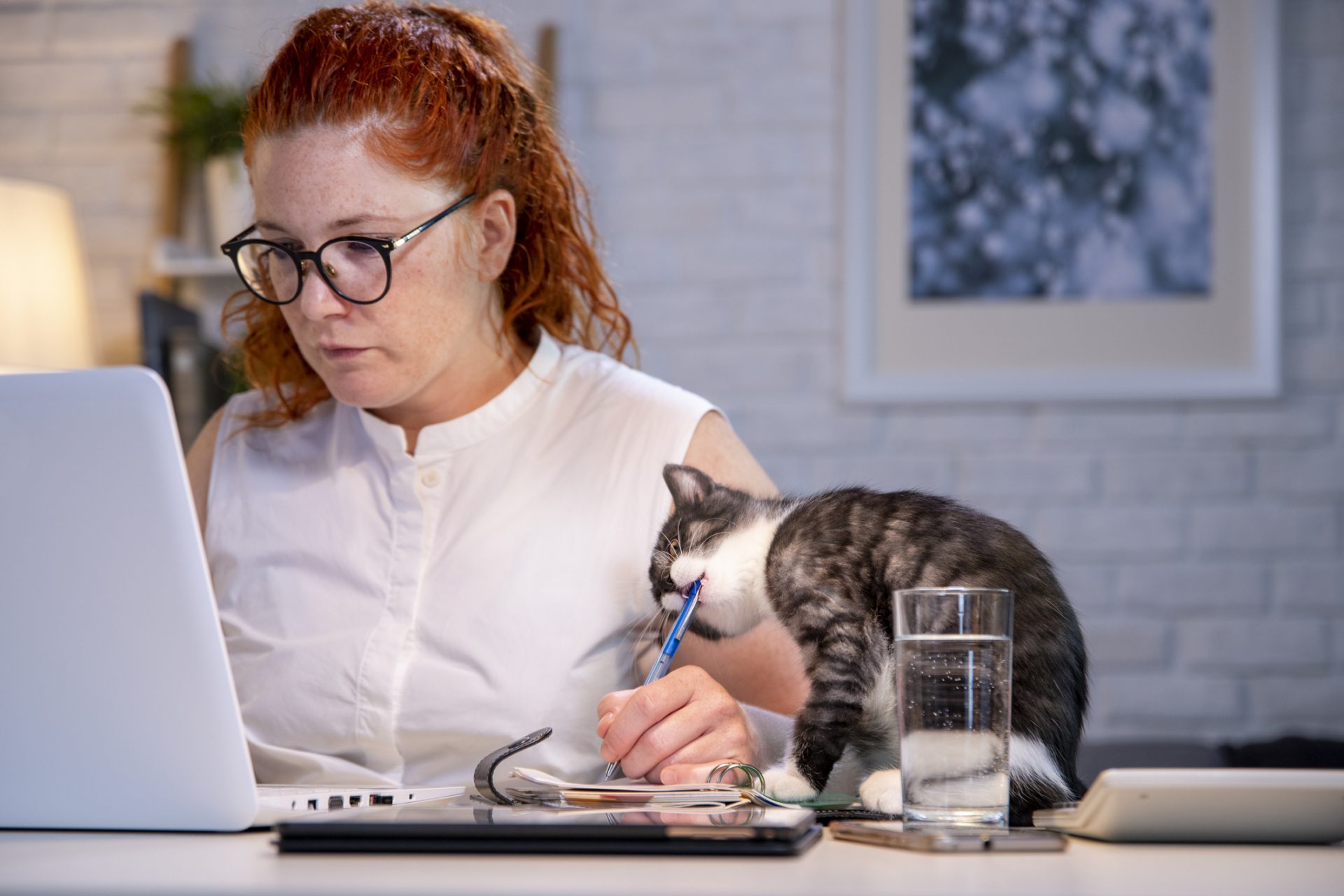