As the Oklahoma Turnpike Authority plans to bring a new turnpike and an extension of an existing toll road to Norman, many property owners are left to wonder what rights they have as they stare down the bold authority of eminent domain.

Poe & Associates, engineers hired by the turnpike authority, reported during a town hall Thursday that the authority has received as many as 600 calls and emails from people who have questions about the plan and the property acquisition process.

Law firms who specialize in property rights or have successfully litigated cases against the turnpike authority or Oklahoma Department of Transportation told The Transcript that the government has broad powers and few limitations when it comes to toll roads.

After the turnpike authority has hired an independent certified appraiser, the property owner can accept the offer or counter with the owner’s appraisal report, according to the authority’s website. If negotiations fail, the authority moves to petition the district court to condemn the property for the right of eminent domain. The court decides the fair compensation.

According to state statute eminent domain is justified by the “necessary public use” of a property and must compensate the owner according to “fair market value,” said McAfee & Taft attorney Colby Byrd.

But “necessary” is a term that carries a broad definition that the government easily justifies, Byrd said.

“A United States Supreme Court case from 2005 held that basically allowed some taking [of property] for economic purposes, but Oklahoma has rejected that. We have a strict public use limitation,” Byrd said. “The property they’re taking has to be necessary for that public use. It’s a pretty low bar to show that’s necessary. You can see a scenario where maybe the turnpike authority has announced a turnpike and instead of just condemning the land they need for the highway and a reasonable amount of land next to it, they go and condemn broad swaths of land that they don’t need. That wouldn’t be necessary and that’s kind of what that [definition] gets us.”

Trae Gray, founding partner at Landowner Law Firm, said unnecessary public use would have to be obvious to overcome the authority’s plans.

“About the only situation where that might not be [justified] is say if they had made some contract with Walmart to put in a turnpike that would feed directly into Walmart to benefit Walmart,” Gray suggested.

“Generally speaking, if the government goes through the process as a resolution of their board and they say, ‘we need X number of acres to do this project,’ it’s probably — and I would say, almost certainly — going to be upheld,” he said.

While public input can sway the turnpike authority’s plans, Byrd said “when it comes down to the brass tax of the legal authority … if they satisfy that public use and necessity as dual requirements, they’re going to be able to take the property.”

However, a competing necessary public use, such as a public water supply, could be a unique legal challenge to the authority, Byrd said.

The authority has not yet performed an environmental study on Lake Thunderbird, which is a major water supply to the city of Norman. City staff have reported to the City Council that the lake has been declared impaired by the Oklahoma Department of Environmental Quality.

“It’s an interesting question on whether one public use could defeat another public use,” Byrd said. “I haven’t looked at that question specifically, but I would suspect as long as the turnpike authority can demonstrate that it’s done its environmental studies and checked those boxes it’s going to be able to build a turnpike. I’ll be interested to see what comes of that as I’ve never encountered that in these turnpike projects.”

City Attorney Kathryn Walker told the council Tuesday that state governments do not have to adhere to the much more stringent requirements of the federal Environmental Protection Agency unless the authority is using federal dollars or falls under federal jurisdiction.

The turnpike authority’s plans fall under neither of those constraints, she said.

Deal or no deal?

State law requires the authority to buy a property at fair market value, but while other considerations for compensation like damages to property are considered, other losses are not part of the price point, Gray and Byrd said.

Some homeowners purchased their home decades ago and paid off the mortgage. The gap between the value of that home compared to purchasing cost for a home in today’s market is a loss that is not considered a factor in fair market value.

“Likely not,” Byrd said. “There are rigid standards for this. In a total taking, the entire property is the fair market value.”

After property owners are notified in writing that their land is in the acquisition path, the authority sends out an “independent certified general appraiser,” said Oklahoma Department of Transportation spokeswoman Jessica Brown.

The appraiser must follow “Uniform Standards of Professional Appraisal Practice,” she said in an email to the newspaper Friday.

Byrd said such appraisers are bound by ethics standards, and the appraisal is the negotiating point despite rumors that the authority pays a low or high percentage above that value.

“Appraisers have their own codes of ethics, and they’re subject to certain standards,” he said. “When they sign off on an appraisal, they’re saying they are signing off on that value. I don’t know that I would phrase it as the OTA or ODOT is coming in low or high, it’s going to depend on the appraisers and the area it’s going through. Is it residential or commercial? Rural? It’s very fact-specific, but it’s hard to speak to that other than in generalities that this is basically how it works.”

There is also “partial taking,” where only a portion of the property is sought by the authority.

“The turnpike comes through the edge of your property or maybe it splits your property right down the middle,” he said. “You still have the fair market value for taken [land], but then you also have to evaluate any damages to the remaining property after the taking. Damages are normally damage in value, but there can be several ways partial taking diminishes value.”

Some examples of diminished or damaged value can be the loss of access to roads after turnpike construction, or the loss of scenic views that add value to the property, Byrd said.

After the authority makes an offer, the owner can accept it or counter with their own professional appraisal report but if negotiations fail, the matter is hashed out in court through eminent domain proceedings, Gray and Byrd said.

Three county property owners who have no interest in the property up for condemnation are appointed by a judge as commissioners of the court.

“All we’re arguing about [in court] is — whatever they seek to take and assuming have the right to take it — is, what’s it worth?” Gray said.

The commissioners recommend an amount, called an award. If the parties do not agree to the commissioner’s award, a jury trial ensues.

Gray and Byrd said if the jury awards an amount 10% or more above the commissioner’s recommended amount, then the landowner can recover their court costs, attorney and other fees. But it can backfire if the amount is lower than the commission award.

Brown said the property owner could be forced to pay for the authority’s court costs, but not attorney fees.

There is one right that stays with a property owner – mineral rights. But some property owners chose to sever those rights, Byrd said.

While the timeline of the turnpike’s construction and acquisition commencement remains unclear, Bryd and Gray agreed one certainty is unquestionable: the competing interest of government and landowner.

“There’s a saying in business,” Gray said. “You don’t get what you deserve, you get what you negotiate. ODOT does everything they can to negotiate the best deal and get it for the lowest price possible. They have a fiduciary duty to the taxpayers of Oklahoma to do that. If you’re a landowner, you have to look out for your own interests. They’re not going to go out and pay a windfall, or anything extra. They’re going to pay as little as they can possibly pay and get as much as they can for every dollar they spend.”

The advantage that the condemning authorities have is “they’re a repeat player,” Byrd said. “That’s their job. When the time comes, it can be highly complicated, very nuanced. There’s plenty of landowners who are going to need a lawyer to help guide them through this process.”

Gray said the most important thing is not to feel pressured or be in a hurry and “to fully understand the scope of the proposed take before they consider making any decisions.”

“At the risk of sounding like a sales pitch,” Gray added that owners should consider the authority “has a team of lawyers that work on these cases.”

“For the landowner to do it without a lawyer is just not smart.”

Improve Your Deadlift With Dr. Mike Wasilisin of MoveU

Mon Mar 7 , 2022
Teaching people how to move and train safely  or in other words, “Fix Yo S#!t,” is the driving desire behind Dr. Mike Wasilisin, the face and brains behind  social media PT giants MoveU. Eliminating unnecessary injuries by sand the subsequent need for pills and insurance claims. Wherever a more appropriate […] 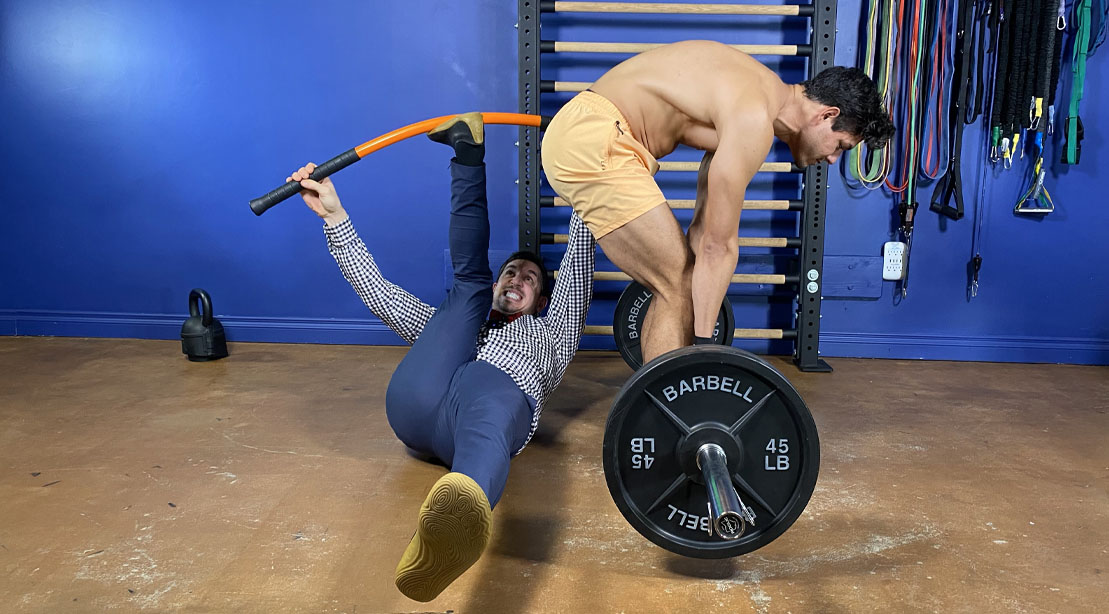